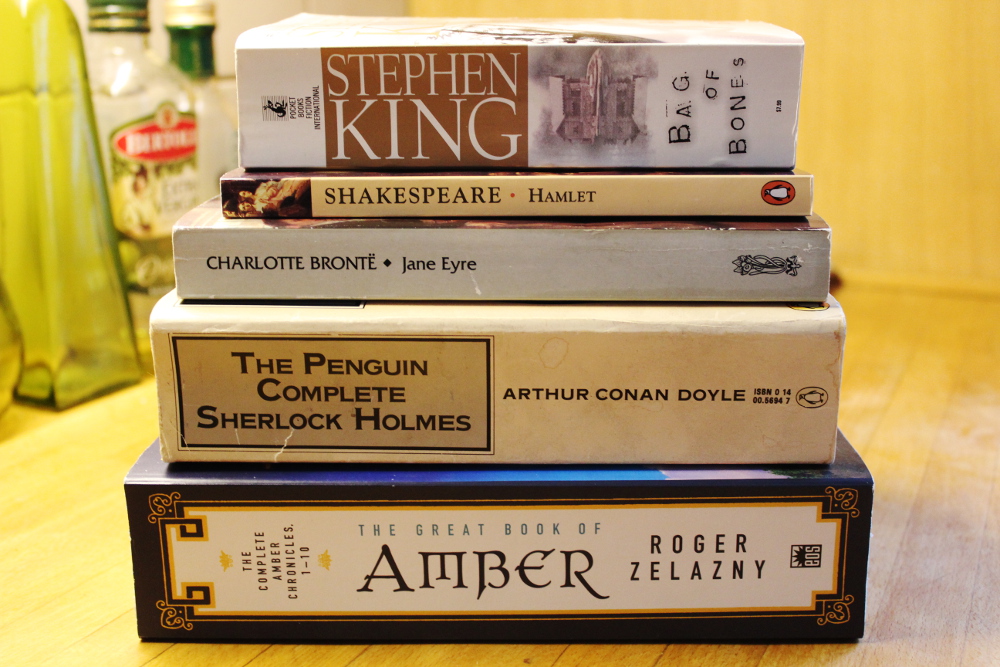 Okay, here come some bricks books I have hunted down during the past ten days or so. I have to admit that I am beginning to get slightly intimidated by all those chunksters that seem to find their way to my home... But what can you do. I love chunksters!
Let's go from top to bottom, then.
* Stephen King, "Bag of Bones" - because you need a good bite of King when feeling like taking a break from all these wonderful (but sometimes a bit exhausting) classics.
* William Shakespeare, "Hamlet" - I purchased this Penguin version for my Classics Club Challenge. Looking forward to being reacquinted with the Scandinavian Prince again. And look what a tiny little book it is (compared to the rest of the pile)!
* Charlotte Brontë "Jane Eyre" - ditto to the last one. I made the mistake of "I'll just take a little peek into this book...", which resulted in not enough sleep last night. I better just finish it off and be done with that :)
* Arthur Conan Doyle "The Penguin Complete Sherlock Holmes" - oh boy. How did I end up with this book, and for 5 (!!!) euros only? Because we have awesome second-hand bookshop here in Helsinki, basically in our back yard... ("Jane Eyre" and "Bag of Bones" were 2 euros both. Why was I ever buying new books?) Anyway... Mr Holmes weighs a ton, has 1200 pages and very small font. I predict this one's gonna take some time. Good thing is that you can read a novel or a story now and then and not feel disconnected from the characters or the overall atmosphere.
* Roger Zelazny "The Great Book of Amber" - and the inevitable dose of fantasy. While Sherlock was a brick, this one's a bloody foundation panel... It is the collection of all the 10 books in Zelazny's "Amber Chronicles" series. I read them, or at least most of them, being young, and in Estonian. Lately I really started missing some good soap-opera-fantasy, an easy read but not the like to dull your mind. This series is all about the characters, and the characters are ... hilarious. Imagine members of a royal family/kin, who smoke, drink, swear and constantly attempt to stab each other in the back? Yep. That's Amber.
So, out of these, I am already halfway through "Jane Eyre", I started "A Study in Scarlet" and also couldn't resist taking a peek into the scheming in Amber (25/120 pages of the first novel read - yes, they are that short!).
Posted by Riv at 12:00