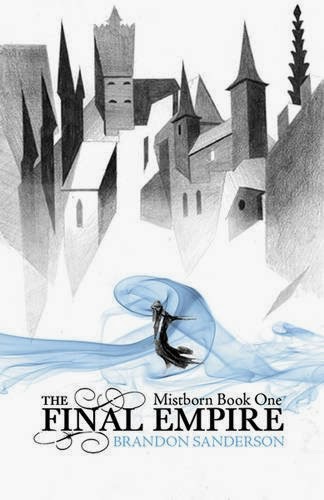 I guess I'm part of the cool kids' group now because I read my first Sanderson book, The Final Empire (the first book in Mistborn series).
This is a different world. The sun is red, there are no green plants. Ashfalls from the sky are regular. Nights are full of scary mists. The Final Empire, where the story is set, is ruled by an omnipotent, godlike Lord Ruler. Majority of society consists of slaves called skaa, who work for the Lord Ruler and the nobility from different Great Houses. Lord Ruler's circle of helpers includes obligators, a group of powerful officials-bureaucrats, and Steel Inquisitors, very powerful and scary creatures.
Vin is a 16-year old orphan (but of course :p), who works for different thieving groups in the capital city of Luthadel, until a group of rebels planning a revolution catches a glimpse of her, and of what she can do with her mind. Like many others, Vin has kind of supernatural powers (called Allomancy) - she can enhance several of her abilities, both physical and mental, with the help of different metals. Vin joins powers with Kelsier and his gang of rebels and together they start searching for ways to get rid of the evil Lord Ruler.
Pretty straightforward, and that's how this book is - but by no means boring. The Final Empire is very well written book. The magic system is one of the most clever and refreshing ones I've read about, and major props to Sanderson for building such a complicated system of magic, and then managing to stay well within its borders and rules (this is in my opinion one of the most challenging things for fantasy writers). Sanderson has great, imaginative mind, and the book is extremely well paced, solid from the beginning to the end. There are some clever plot twists and revelations placed skillfully in the end of the book. Plot twists tend to annoy me a lot, maybe because oftentimes they are created just for the sake of them and thus feel artificial, but Sanderson is a great story weaver and twists were good.
There are also some great finds among characters and creatures. Steel Inquisitors are probably the most intriguing for me, very powerful Allomancers or Feruchemists (a slightly different source of magic in this book). Mistwraith are strange creatures living in the mists. Lord Renoux, definitely one of my favourite characters. Among the rebel group I loved the character Sazed, a kind of a steward and collector-keeper of stories, religions and all kinds of knowledge about the world. Sazed was great, kind of feet firmly on the ground and no-nonsense, no-drama person who nicely balanced Vin at the time when she was having one of those teenage moods. I wasn't particularly fond of Kelsier, Vin's trainer and the mastermind behind the rebel group, or Vin herself for that matter. Vin was not badly written, she got on my nerves a lot, especially towards the end of the book, and it's totally believable because she was a 16-17 year old.
There are a few reasons though that keep me from giving this book maximum rating. There was nice amount of focus on Vin, Kelsier and a few other more central characters, but then we have this group of Kelsier's crewmembers, who had an important role but they blended into one vague mass of people and I could not point out the differences between them that well (Breeze, Dox, Ham, Clubs). It was kind of like the Tolkien dwarves' phenomenon from the Hobbit movies - a group of dwarves, you know they are important, but don't have much to say about each individual.
Also, the language. There is a lot of dialogue in the book and some of it can feel a bit odd (do friends really talk like that?), and also Sanderson uses a lot of dialogue to explain the concept of Allomancy and Feruchemy, which can feel a bit like dry info dump. The language is very simple, and this is not a bad thing. It's just not that much my thing.
I read this book on Kindle, but I will definitely get the physical copies of this series.
PS. There is no dragon in this book - yay.
Posted by Riv at 13:05 16 comments:

The Name of the Wind by Patrick Rothfuss

I do feel like I should find a good sturdy ringmail and perhaps a tower shield, as The Name of the Wind by Patrick Rothfuss is a very well loved book with enormous amount of hype behind it, boasting with the average ranking of as high as 4.56 out of 5.00 on Goodreads site. For me, The Name of the Wind was a bumpy ride - there were things to enjoy, and then there were things that made me cringe.
I feel like this one has to be divided into non-spoilery and spoilery sections. Usually I try to avoid spoilers at any cost, but the problems I had with this book will not come through unless I really go into detail regarding certain parts of the story, and characters. Also, since so many people have already read The Name of the Wind, it might be interesting to talk a bit longer. And I know some of my blogging buddies love this book a lot, so I hope we can still be friends after that :)
I made a little chart to illustrate what I mean by "bumpy":
Let's start off with non-spoilery bits:
Overall - I definitely would not encourage anyone to skip this book. It is well loved and I can see why; the problems I had fell mostly under the category "It's me, not you". But I also think if one was taking his/her first steps in fantasy, there are better-constructed ones out there to start with.  I will not be chasing after the sequel, but might give it a go if it just happened to come to me somehow.
SPOILERS! SPOILERS! SPOILERS! SPOILERS! SPOILERS! SPOILERS!
If you haven't read this book yet, and intend to, please don't read any further!
Okay, the spoilery part seems to be the one where I rant. But not only!
Posted by Riv at 23:53 19 comments:

First of all - thank you for all of your sweet and encouraging comments to my last post. I feel so lucky to have met such a wonderful bunch of girls through book blogging!
It has been the hardest and saddest week in my life. We said the final goodbye to my dad yesterday, and it was a beautiful ceremony. I'd like to think my dad would have liked it.
This week I have thought a lot about death, about dying quite young (my father was only 55) and have discovered things about myself. I can be strong and give support to people around me, it was a good discovery. Jan has been enormous source of help, of course, and I am thankful. There are things that will be difficult from here on, but it's important to take it a day at a time.
We will be returning to Helsinki today and I hope I will get back the desire to read soon. So far I haven't really been able to focus more than a few pages at a time.
Posted by Riv at 12:10 8 comments:

Hey guys, I just wanted to leave a mark saying I will be away for a while. I learned a few hours ago that my dad has unexpectedly passed away, and even though it still hasn't registered in my mind, I know I will not be in the mood for blogging and such for a while.
Stay safe everyone.
Posted by Riv at 12:16 19 comments:

In general, all I have to say about this month is that it was cold. Really, really, annoyingly, unbelievably cold. That's it. Moving on to warmer more interesting stuff.
I finished 12 books in January - bang! What a start to the year. In all honesty, though, a few of them were the ones I had started some time ago and had a bit left to finish (The Man Who Mistook His Wife For a Hat, The Quantum Thief), but I'm glad I wrapped them up.
To crunch some numbers, this makes:
-- 2 books from my Classics Club list;
-- 3 fantasy books;
-- 3 sci-fi books;
-- 4 non-fiction books (yay!);
-- 2 YA books;
-- 4 chunksters (!), 2 books towards TBR Pile challenge, 1 towards Russian Lit challenge.
If every month was such :)
Moving on to the films - I am not a big movie person, generally. There isn't that much I want to see in theaters, and I always prefer a book over a film. However, in attempt to be more of a well-rounded person, I was inspired by Sarah's post, in which she decides to watch 52 movies in 2014. I'm not going to set a number for myself, since my movie watching schedule is so random, but I decided to at least try to document what I watch and how much I watch.
In January, we watched 3 movies (very puny result, I realise):