Closing the lid of March - an exceptional reading month

Yesterday Jan took a look at my blog and said that I haven't posted in three weeks. It's a sad truth and I'm a major slacker. Moving on though, March was an awesome reading month - all the books I read I rated 4 or 5 out of five. Yep! I don't think this has happened before. (If I had managed to finish American Gods this wouldn't have happened! But I didn't finish.) I also read two books in Estonian, which is good since I tend to forget some words in my native tongue already - not cool. 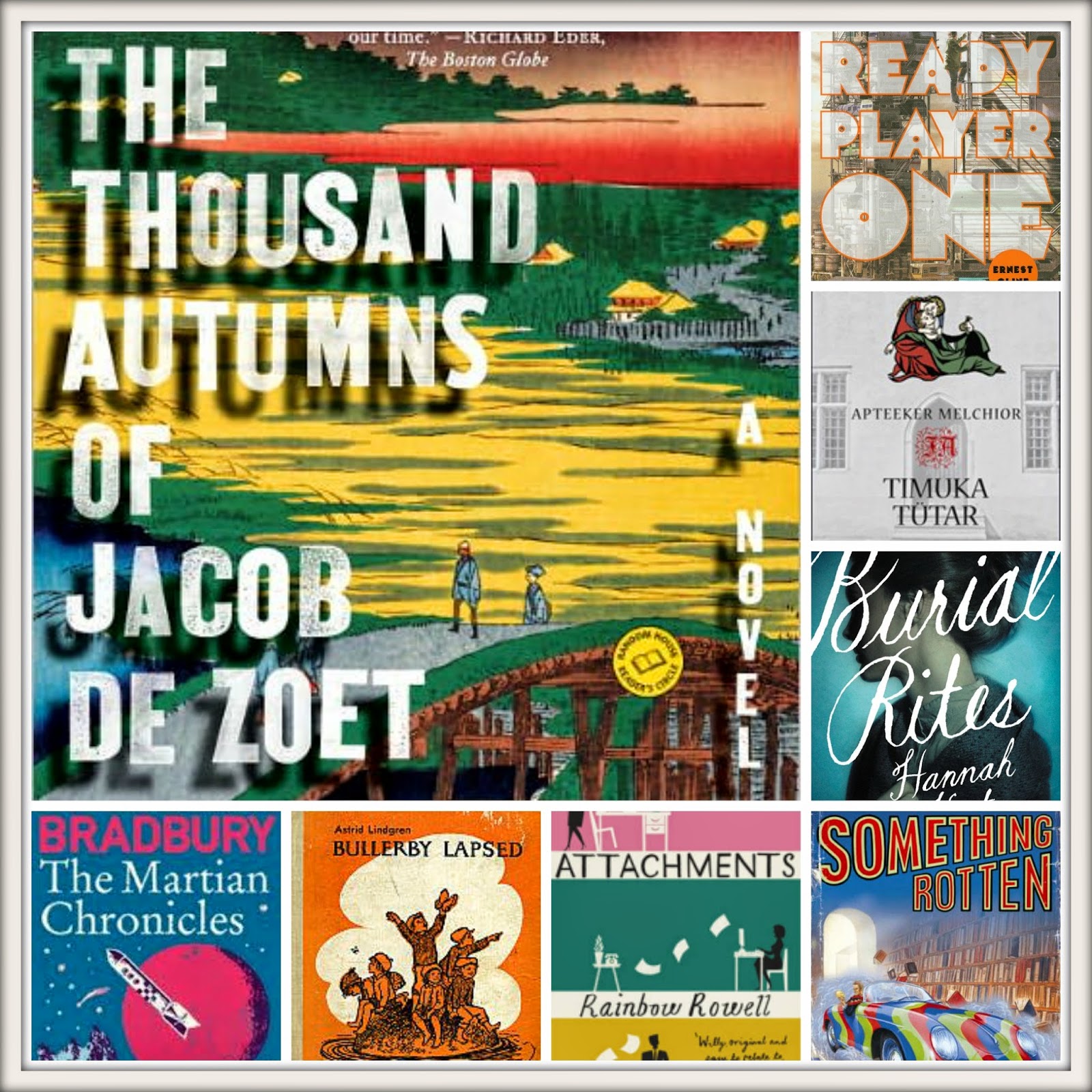 * Ready Player One by Ernest Cline -5/5
* The Thousand Autumns of Jacob de Zoet by David Mitchell - 5/5
I can now say David Mitchell is one of my favourite authors. If I had to say what was better, this or Cloud Atlas, I'd have real hard time deciding. I already have next book by him that I plan to read - Number9dream. It's also pretty cool that both Jan and I love Mitchell books and it's nice to discuss stuff and share the opinions.
* Timuka tütar by Indrek Hargla - 5/5
Indrek Hargla is an Estonian author who started out writing fantasy, but the books I've read by him are from this series of medieval mystery. The main character is druggist Melchior Wakenstede, who helps to catch crooks in old Tallinn around 1400s. It's funny and a treat for everyone who knows Tallinn Old Town fairly well because all the locations are very recognisable (I lived in Tallinn over 10 years before I moved to Helsinki). The direct translation of the title would be "Daughter of the Hangman" or something like that.
* Burial Rites by Hannah Kent - 4/5
Very solid debut by Hannah Kent, although I didn't find it quite as mindblowing as some other people. It did take me to the midst of cold and cruel Icelanding landscapes, though. Ending felt a bit abrupt.
* The Martian Chronicles by Ray Bradbury - 5/5 (re-read)
Since this is one of my favourite books of all time, rating it is kinda pointless.
* Bullerby lapsed by Astrid Lindgren - 5/5 (re-read)
My favourite book from the childhood. I must have read this book maybe 30+ times.
* Attachments by Rainbow Rowell - 4/5
I think this is the kind of book that meets the goal it sets. It's an easy read and in that light it is quite well done. I am glad I tried a Rainbow Rowell book, but it's unlikely I will be reading anything else by her because this is just not the kind of literature I prefer most of the time (like... 95% of the time). I did give it high rating though because rating it lower just because I am not that fond of the genre would be a bit weird. A very decent poolside read (if you are the kind of person who likes hanging out by the pool, that is - I ain't.)
* Something Rotten (Thursday Next #4) by Jasper Fforde - 4/5
Thursday Next kicking ass once again. It doesn't get maximum points though because even though it was a very fun ride, I missed inclusion of such hilarious literary characters as there were in past (Miss Havisham!). I mean Hamlet's okay but okay ain't exceptional. I am curious of how this series is going to go on now because several loose threads were tied in this book and from what I've heard, some pretty big changes are going to take place in future books.
I don't think we watched any movies this month - the story of my life...* There are a few things though that are going to be in Finnish movie theatres soon that I definitely want to see - The Grand Budapest Hotel and Miyazaki's latest treat The Wind Rises (Kaze tachinu).

Edit: I remember now that we did watch a movie in the beginning of the month - Blade Runner (1982). I am very fascinated with everything AI-related and this film was overall very atmospheric, very well done. Though when I heard the film music at first (Vangelis - it's just so recognisable you don't even need to check it) it felt a bit odd but I think it matched well with the movie. I'm curious to read Dick's novel as well since from what I've heard, it's hugely different from the movie (not sure the movie can even be called an adaptation).
Posted by Riv at 14:32