I have already signed up for two reading challenges for 2014:
TBR Pile Challenge
Russian Literature Challenge
I don't want to take on too many challenges, so I decided to settle with a nice number five. 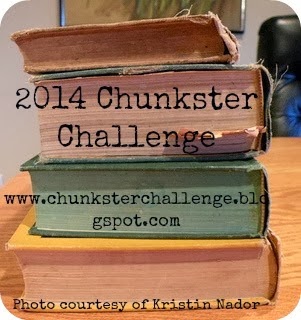 This year e-books and audio-books are allowed, so this is partly the reason why I am joining in, I will definitely be reading some big books on my Kindle reader.
Head over to this web site to learn about the challenge, sign up and see who else is taking part.
I will not be setting any goals for this challenge, but in the end of the year it will be nice to see how many chunksters I've tackled. I just made statistics on 2013 and based on the rules of the challenge (that a chunkster is book with 450 pages or more - 450 is not enough for me personally, it would have to be at least 500 pages), I read more than 20 chunksters (out of 64 books read), so hoping something similar for 2014. 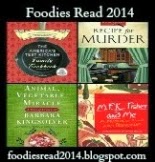 More information on the challenge can be acquired from Foodies Read 2014 web page.
Although food related books are not only limited to non-fiction, I personally will be aiminig for those non-fiction foodie books I've been eyeing for a while. I will aim for the level 2: Pastry Chef (4-8 books). 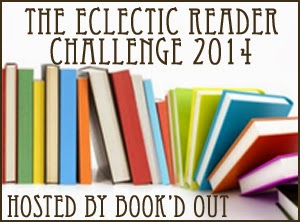 1. Award Winning - Wolf Hall by Hilary Mantel (several awards - like Man Booker Prize for 2009)
2. True Crime (Non-Fiction) - The Devil in the White City by Lars Erikson
3. Romantic Comedy - The Rosie Project by Graeme Simsion
4. Alternate History Novel - Something Rotten by Jasper Fforde (Thursday Next #4)
5. Graphic Novel - Relish: My Life in the Kitchen by Lucy Knisley
6. Cosy Mystery Fiction - The Sweetness at the Bottom of the Pie by Alan Bradley
7. Gothic Fiction - Rebecca by Daphne du Maurier
8. War/Military Fiction - War and Peace by Leo Tolstoy
9. Anthology - no idea yet.
10. Medical Thriller Fiction - Symbiont by Mira Grant (Parasitology #2; expected to be published November 2014)
11. Travel (Non-Fiction) - Neither Here Nor There: Travels in Europe by Bill Bryson
12. Published in 2014 - The Martian by Andy Weir

A few categories were especially difficult to fill out, like Romantic Comedy and Medical Thriller fiction, or Anthology - which I have not payed much attention before.

If anyone has a recommendation of anthologies related to food, fantasy or sci-fi - please let me know!
Posted by Riv at 12:50