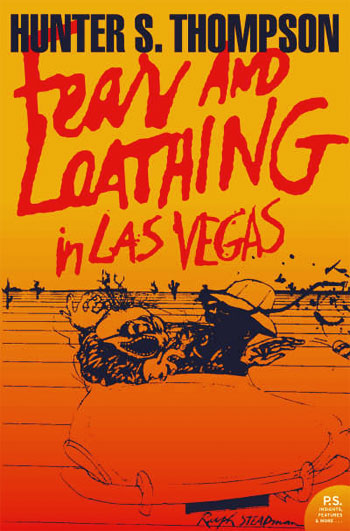 We were somewhere around Barstow on the edge of the desert when the drugs began to take hold. /p. 3/

I guess a beginning such as this is bound to suck you in. Who are these people and why are they doing drugs in the middle of some desert?

These people are Raoul Duke, journalist and alter ego of the author, and his Samoan attorney, Dr Gonzo. They are in search for American Dream. The journey to get there is rough and full of (hilarious/sad/philosophical) obstacles.

So, if one has decided to set out for American Dream, preparations are, of course, necessary.

The trunk of the car looked like a mobile police narcotics lab. We had two bags of grass, seventy-five pellets of mescaline, five sheets of high-powered blotter acid, a salt shaker half full of cocaine, and a whole galaxy of multi-colored uppers, downers, screamers, laughers... and also a quart of tequila, a quart of rum, a case of Budweiser, a pint of raw ether and two dozen amyls. /p. 4/

Yep, looks like they worked quite a bit on preparations. By the time the gentlemen Duke and Gonzo arrive to their hotel in Las Vegas, the "preparations" seem to be in quite a decent effect.

Terrible things were happening all around us. Right next to me a huge reptile was gnawing on a woman's neck, the carpet was a blood-soaked sponge - impossible to walk on it, no footing at all. "Order some golf shoes," I whispered. "Otherwise, we'll never get out of this place alive. You notice those lizards don't have any trouble moving around in this muck - that's because they have claws on their feet." /p. 24; a fragment from a conversation in hotel bar/

From there on, I guess it goes as you'd expect, given the involvement of the pile of "uppers-downers-screamers-laughers" mentioned a few paragraphs above. As soon as the dialogue opens between Gonzo and Duke, this book gets really.really.funny. Let's just say that my favourite, most hilarous scene included Gonzo in a bath tub in the hotel, an electric radio, somewhat more sober Duke on the door, and a song about White Rabbit. I was standing in kitchen, reading it out loud to my boyfriend, not far collapsing out of laughter.

Thompson's language is rich, juicy and spot on. He does not linger; every sentence is packed with contents and he has obvious talent for dialogues. I do suspect his experience in journalism has a large part to play here.

While reading "Fear and Loathing in Las Vegas", I couldn't but to compare the novel with "On the Road" and Thompson with Kerouac. Both novels cover drug- and booze-hazed road trips through America, both are largely autobiographical, both authors have highly colourful personas. While Kerouac tried to introduce the style of writing that he called spontaneous prose (which was very pointedly described by Truman Capote as "That's not writing, it's typing" - no, I don't think Kerouac is a particularly elegant writer either), Thompson managed to invent gonzo journalism - a concept where journalist is a strong part of the story, with his emotions, thoughts and experiences laid on the table.

So, what about the American Dream, then? Was it the same American Dream sought by hippies and the whole counterculture in the 1960ties? If so, I guess it is impossible very difficult to find. At least through the measures taken in "Fear and Loathing". Duke and Gonzo did find something, in the end, but I am quite not sure if it was what they had in mind when at first starting off to the desert.