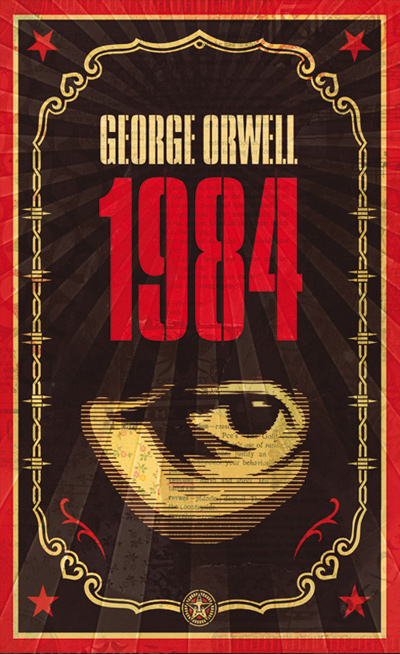 Warning (in case there is even a person left who has not read this book): (minor) spoilers ahead.
Whoah. This is one of those books that provokes too many thoughts and at times it feels like someone is twisting spaghetti in your brains, with a fork. Legendary novel published in 1949, set in the year 1984, which I read in 2013 - that was a promising springboard.
First of all I think it is appropriate to say that people probably read this book very differently. I think a college student from America or Australia might get a pretty different experience from this one than, for example, people older than teens who are born in the eastern side of Europe. I was born in Estonia, so I qualify as a person having stronger connection to totalitarian regimen to begin with. That means that some things in the book, which to some may seem totally bizarre, crazy, unthinkable, stupid, pointless - are not all those things for some others; these are pretty similar to life that they have lived, or that their parents or grandparents have led.
Okay, to shake this gloom off a bit, I have prepared a neat (muahahahaha) lit'l chart for you:
﻿
﻿
The novel describes a dystopian society led by mysterious Big Brother and the Party. Party is divided into two: inner and outer. If you are member of the elite, you get real coffee, red wine, crackers, servants and the option to switch off the Eye for some time in your apartment (the telescreen that sees and hears all, plays propagandistic/militaristic music 24/7 and in normal cases, cannot be turned off). If you are member of the outer Party, you get oatmeal, synthetic gin and cigarettes that are basically non-smokable. In the bottom of the chain are proles - they are basically like hippies living in poverty. No-one pays them much attention, they have more liberties to do what they like than, say, outer Party members, but since they are practically starving, all they can do is drink, smoke and try to keep their sorry souls alive.
We follow the story of Winston - 39-year old outer Party member, whose life is a shithole not so good. Winston's problem is that since he has managed to maintain some amount of independent brain work, he fully realises that his life is crap. He is contacted by his fellow party member Julia, with whom he has never exchanged a single word (apparently it's better if Party members do not talk to each other because it can end in trouble) and to whom Julia delivers a note saying "I love you". Wth, right? And she's not 16, she is 25. Well ok, let's see... Despite the dangers and threats, they start secret meetings and develop a physical relationship. Of course, it is not difficult to guess that as in a proper totalitarian world, the Eyes are everywhere, and big problems commence.
The novel is divided into three parts. Part I introduces Winston and his life, and in general the society of super-country called Oceania. Part II focuses on Winston's and Julia's relationship, and part III, in large, shows how the Party tries to convert Winston into the society of duckspeakers.
I think since I was fairly familiar with the contents of this novel even before reading, I was trying to focus on side-things. For example, the relationship between Julia and Winston. Nowadays, or in a "normal" world, they would have been just sex buddies, I think. It seemed that their love for each other was just love for another person who too cannot stand the system. Didn't seem to matter that much who that person was exactly. Since they have quite a bit of age difference, Winston himself ponders at times over Julia's lack of enthusiasm to come up with some plan to, well, destroy the barricades. He says
But she only questioned the teachings of the party when they in some way touched upon her own life. /p. 160/
and
"You are only a rebel from waist downwards," he told her. /p. 165/
So I didn't really buy the love story, but of course, we all (more or less) have needs, so I kinda got that part.
Orwell spends good deal of time and paper space by describing the plans for new language that the Party and Big Brother are trying to root. It's called Newspeak (as opposed to Oldspeak - the old English language) and for me, some of the spooookiest moments in the novel associated with that.
"Do you know that Newspeak is the only language in the world whose vocabulary gets smaller every year?" /p. 55/
Erm... and how is that a good thing, exactly?
"By 2050 - earlier, probably - all real knowledge of Oldspeak will have disappeared. The whole literature of the past will have been destroyed. Chaucer, Shakespeare, Milton, Byron - they'll exist only in Newspeak versions, not merely changed into something different, but actually changed into something contradictory of what they used to be." /p. 56/
Ugh... given how words were being destroyed and the existing ones, well, merged (there was "good" but no "bad" - that was to be "ungood", you catch the drift), I don't really see what point there was to keep any texts at all.
I can see how people go screaming after they read the ending of "1984", but I'd say that was realistic, as much as one can imagine things being realistic in the conditions like that. So I didn't really mind. But overall, depressing reading, of course. And thought-provoking.
My regret is that I did not read "1984" in "tender" age, like, in high-school. It would have made an enormous impact on my persona, no doubt. After you get older, and maybe take extensive literature courses in uni and so all, you can go kind of numb to certain texts and become too analytical as opposed to experience properly.