Top Ten Books I Want to Read This Autumn

So my participation in Top Ten Tuesday is very random, depending on the appeal of the topic, and this time the topic is pretty appealing (mainly because I love autumn and I love lists), so I decided to do it. The meme is hosted by folks at The Broke and the Bookish, go check 'em out for more information.
It was easy to make this list because I am kind of hoping to get a lot of reading done this autumn, and I am already on a good path thanks to RIP VIII event. There is also the 24-hour readathon coming in October, so the reading scene looks pretty shiny indeed.
All the books are from my already existing shelves, 'cos that's how I roll (I really like to prioritise the books I already own, which is why I also find these lists and events very helpful). 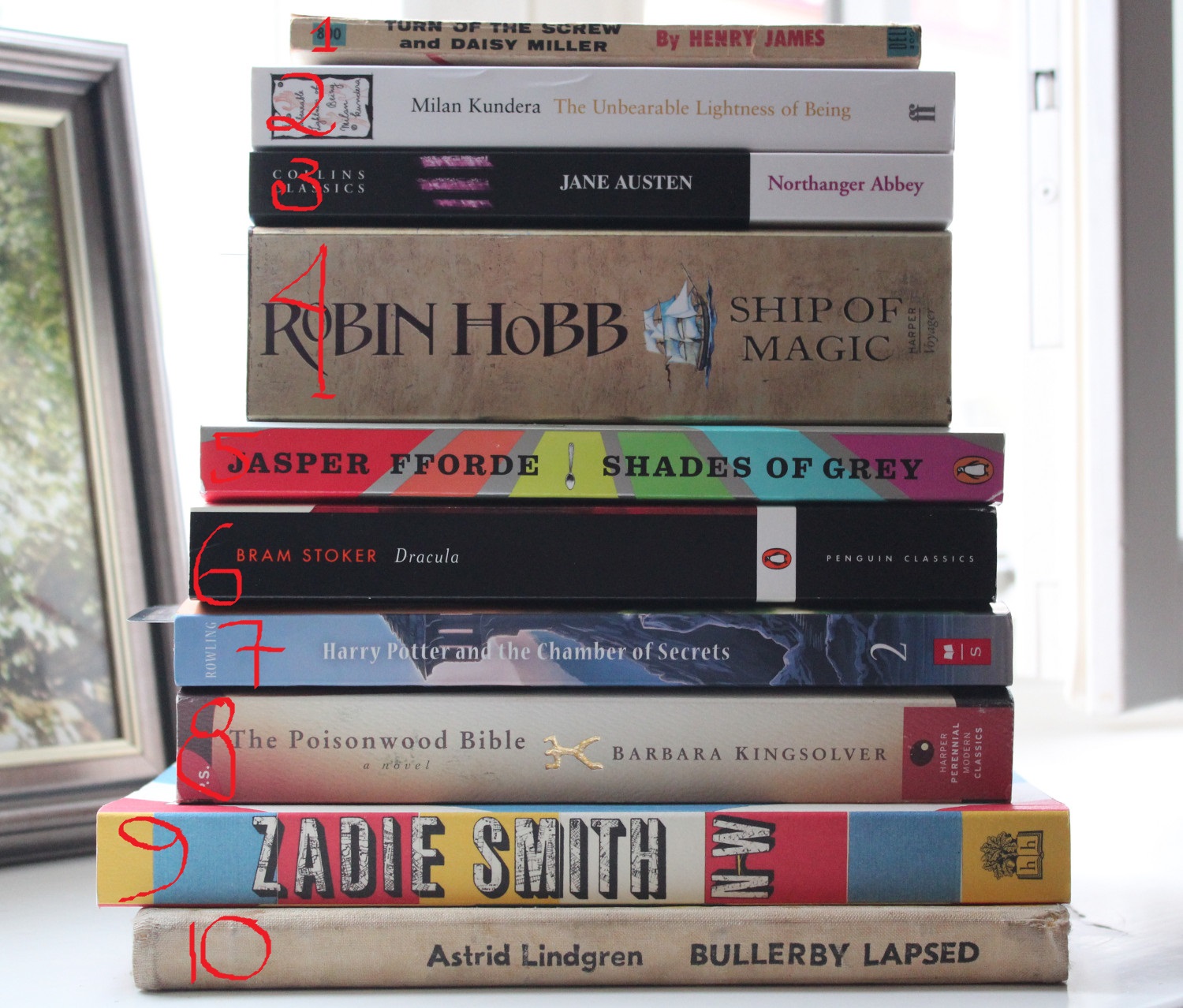 1. The Turn of the Screw by Henry James -  short, spooky and classic.
2. The Unbearable Lightness of Being by Milan Kundera - I failed to re-read this during the reading slump I had in summer, and actually this is autumn book instead anyway.
3. Northanger Abbey by Jane Austen - I mentally added this to RIP VIII list because it's appropriate and there's a readalong coming in October, and also it's a small book.
4. Ship of Magic by Robin Hobb - I actually read a bit of this one recently at the point when I was between the books, and it was really good! Ships that are alive? Crazy. But potentially awesome.
5. Shades of Grey by Jasper Fforde - I loooove Fforde's Thursday Next books and after having seen a few good things about this book, I just decided to check it out. Curious to see how Fforde writes other things!
6. Dracula by Bram Stoker - it's going to be the Halloween read.
7. Harry Potter series by J.K. Rowling (currently reading Harry Potter and the Chamber of Secrets) - so yes, this is bad, but I have never read those books. I just finished the first one last night. When I saw the news of the 15th anniversary edition covers in spring, I decided to get the series in autumn because I really love these covers. So I now own the first three books and will get the rest as well.
8. The Poisonwood Bible by Barbara Kingsolver - just because I want to read it.
9. NW by Zadie Smith - I still have a few Women's Prize books on my shelf, and I want to get done with the shortlist by the end of this year. (Shortlist minus Hilary Mantel's book that is since I just couldn't get into Wolf Hall, at all...)
10. Bullerby lapsed (Barnen i Bullerbyn, The Children of Noisy Village) by Astrid Lindgren - this is the star book of my childhood, probably. Well I had piles of favourites, but the very favourite must come from among Lindgren books, and it's probably this one. And I want to read it again (I think the number of my re-reads of this book must be over 30 by now).
Let's break it down:
* 5 Classics Club books
* 3 RIP VIII books
* 3 fantasy books (yay!)
* 1 Women's Prize book
* 1 children's book
Posted by Riv at 11:14