Basically my whole summer has been a big blogging slump (in addition to reading slump that I suffered from in the beginning of the summer), so to start from kind of a clean sheet in the beginning of autumn, I'm going to simply mark down all the books I read in summer but did not write about (except for Classics Club ones, since I want to talk about them longer).

Lost in a Good Book by Jasper Fforde - there is nothing I did not love about this book, except that I only managed to find a copy with this horrible cover. Covers by Hodder are wonderful and I managed to find four other books out of the first five with these covers (although I had to order them from different sources), but not the second one. Bummer. It's always going to stare at me from the bookshelf yelling "I'M THIS DIFFERENT COVER AND IT'S EVEN MORE ANNOYING 'COS I'M AWESOME AND YOU KNOW THAT".
Anyway, the wonderfully literary-witty-hilarious adventurers of Thursday Next continue in this sequel, which I maybe liked even a tiny bit more than book number one.
5/5 on Goodreads.

Golden Boy by Abigail Tarttelin - a well-crafted and -flowing book on a sensitive subject of intersex people. Multiple POVs were well done, characters were able to draw my sympathy, there was no sugar-coating and many events happening in the book felt very life-like, instead of fairytale-ish.
Despite its very accessible writing, the book has potential to make you ponder over all kinds of deep and existentialist matters, such as staying true to yourself (trust me, in the light of the subject discussed in the book, it doesn't come off as cheesy as it may sound).
4/5 on Goodreads.

May We Be Forgiven by A.M. Homes - how can I even begin to think anything remotely objective about this book, having read it after it became announced as winner of this year's Women's Prize? It was a very different book and it made me curious about the author's other works (apparently she has quite a lot of published texts out!) This was not your smoothly following narrative, no; this book was dry, and snarky, and sarcastic; it dared to make fun of its own heros and the world in general. I can't remember a single descriptive scene from May We Be Forgiven! And that is exactly what I appreciated about this book. Although it did not sway my (undying?) love for Life After Life, I gave May We Be Forgiven a solid
4/5 on Goodreads.

You're All Just Jealous of My Jetpack by Tom Gauld - I won this book full of intelligently funny comic strips from a giveaway, which was perfect since I had almost bought it myself once, earlier. (So I was going to buy it if I didn't win it.) If you haven't visited Tom Gauld's Tumblr page, do your literary slash geeky self a favour and do it - although I did not get all the jokes (which unfortunately lowered my rating because even though it may be my own lacking level of intelligence that stops me from getting references, I think a good comic should attempt to apply very wide audiences), this book and Tom Gauld's works are hilarious. (Oh and did I mention literary? And nerdy? Yes.) And the drawing style is just adorable.
I hope I'm not violating copyright, but here's a strip from Gauld's site that I linked above, the one that inspired the title of the book, and is poignant, and so hilarious: 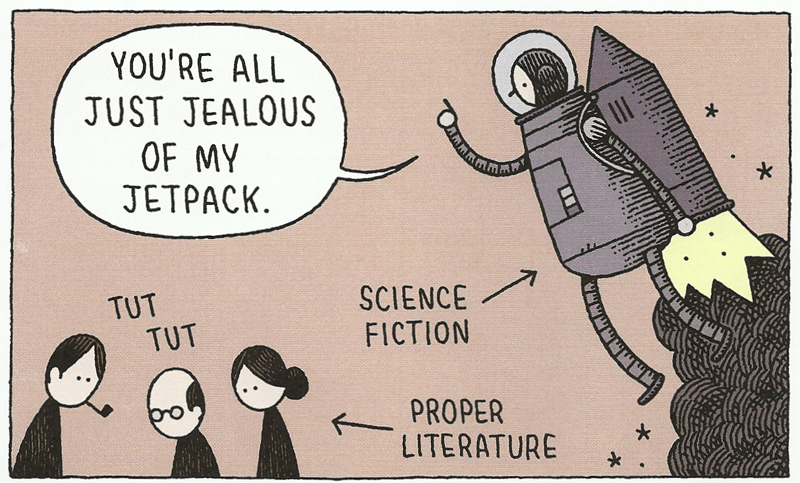 Matk naeratuse eest by Adam Bahdaj, Agu Sihvka annab aru by Jaan Rannap and Roostevaba mõõk by Eno Raud - the middle-garde reads that my young self enjoyed (all are re-reads, obviously; some even multiple re-reads). First two books are outright funny - these guys know how to write hilarious characters. The third one is more of adventurery type, focusing on comeraderie and moral values. How can you even begin to give rating to the books that shaped part or your childhood? (And so many books did that for me, and I am willing to give 5/5 to them all, without a blink of an eye.)
5/5, 5/5 and 4/5, respectively.
Posted by Riv at 07:03