After having finished my second Jane Austen novel, I am willing to take back all the prejudices that I used to have towards her and feel confident to say that I will intend to read all her bigger works - at first I only added two books to my Classics Club (CC) list and now I have read them both and can safely say I've not yet had enough of Jane Austen. It's no "chick lit of the past times", as I mistakenly thought. She was clearly a clever and eloquent woman.
I had heard of Mansfield Park as being the most boring and "meh" out of Austen's six biggest novels, and that was partly why this was the book I added to my CC list. I deliberately did not add the more popular ones, knowing that if I did like what I read from the two more controversial ones, I would get to the more popular ones anyway. 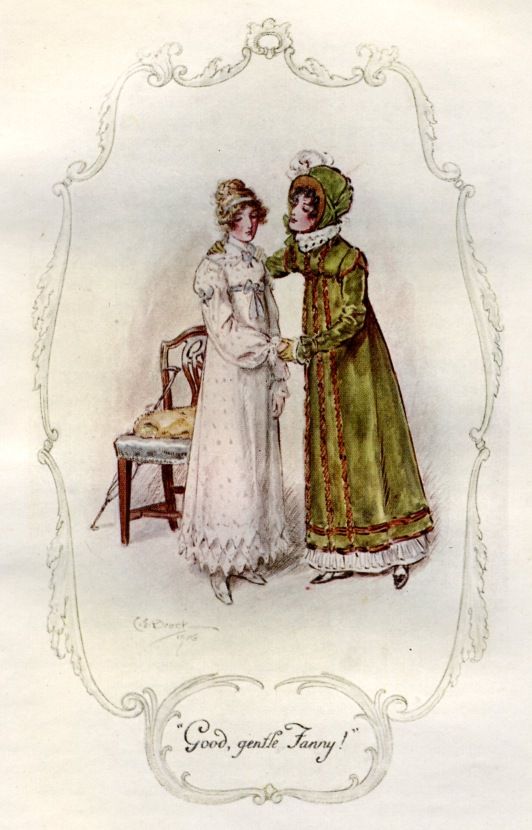 My guess is that the reasons why people are not that into Mansfield Park lie in characters and the pacing of the story. It is a slow roller, that is true, the romance is not that "in your face", and there are parts that can bore some people (for example, the whole fussing around with the play, which took several chapters). I personally am not disturbed by slower stories, maybe even quite the contrary.
When it comes to characters, and specifically the character of the female heroine Fanny, I actually liked her a lot more than I think I will like girls from Pride and Prejudice or Sense and Sensibility or Emma. I liked Fanny's quiet ways; she was almost invisible most of the time, but she had her values that she did not trade for anything. I think the mistake that is easy to make here is taking quieter personality for spinelessness. Fanny has a spine, and I would actually tip my hat to her (if I was wearing one) for what I think is her great survivability instinct. Here's what I mean: in the age of a child, Fanny was sent away from home, to live with relatives. Even if it was better for her, no-one asked whether she liked it or even, what she thought of it. In the family there were the children, and then there was Fanny, often an object of oppression and basically free workforce. I guess what I am trying to say is that Fanny never had the home field advantage, and in such situation, I think it's wiser to lay low and see how it goes, rather than show a lot of personality.
One can probably claim that Fanny is a bit boring in the sense that she is not noticeably strong heroine, but I disagree; Fanny, like many others, is a character similar to those we meet in life, and not everyone of us is always vastly unique, original, witty, snarky, et cetera. Life is full of different characters, some more outstanding than others, and although I certainly can value a very strong female character (think Marian Halcombe from The Woman in White), I am a bit disturbed by the fact that it is the characters with lots of extravagance that get most attention. I am a quiet, modest person myself, although with a lot of spine and stubborness ;), and I guess a part of me would like to think that in skilled writer's hands, a character like me would also form a (half) decent story.
In short, I did enjoy Mansfield Park, but partly because of low expectations to begin with; I am glad I am getting over my prejudices towards Austen, even though I know that she will never be my favourite author.
---
Here are few other reviews on Mansfield Park that I have recently read and liked:
* Thoughts: Mansfield Park by Jane Austen by Adam from Roof Beam Reader
* Mansfield Park by Jane Austen by Eszter from Anneish Imaginary Adventures
* Mansfield Park by Mary from bibliographic manifestations
* Mansfield Park by Jane Austen (Review) by Ekaterina from In My Book
* Mansfield Park by Jane Austen by Brona from Brona's Books
Austen in August is hosted by Adam at Roof Beam Reader.