Top Ten Tuesday is hosted by the people over at The Broke and the Bookish and today's topic is "Top Ten Series I Would Like to Start But Haven't Yet".
I like series. I have read some very nice ones - "Lord of the Rings", "Song of Ice and Fire" (up to as much as has been published), "The Farseer Trilogy" by Robin Hobb. Nowadays the amount of series coming from publishing houses makes me feel a bit uncomfortable, because it seems like it's done for financial reasons, so that maybe explains my lack of interest towards the newer stuff.
But, there are some series I would like to read some time in future, and here they are:

1. Harry Potter series by J. K. Rowling. It feels odd to be what seems like the only one who hasn't read Harry Potter. After I read that the books are getting new covers, and the first one I actually like very much, I decided that this autumn when the series gets a facelift, I shall buy them and read them, and not feel left out anymore.

2. The Dark Tower series by S. King. Not being a major King fangirl (post about that coming out as well), I am interested in The Dark Tower books. No idea when I get there, though.

3. The Liveship Traders series by R. Hobb. Robin Hobb writes lovely fantasy and deserves more attention. Last year I finished her "The Farseer Trilogy", which is one of those few stories that left me weeping like a babe in the end. So I decided to continue with her trilogies. I have the first book at home and maybe I will pick it up, some time, on a whim. 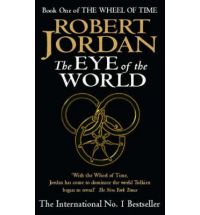 4. The Wheel of Time series by Robert Jordan. Very much intimidating, but at the same time I want to read. The bad thing is that as much as I've heard, level of quality of different books in the series is very uneven.

5. Malazan Book of the Fallen series by Steven Erikson. Probably less known fantasy series, this requires a lot of attention and dedication, and it can take a while to get used to the myriad of characters and the strange worlds. I have started the first book some 2-3 times, and never finished, but I'm not giving up.

6. The Ultimate Hitchhiker's Guide by Douglas Adams. Maybe not that kind of conventional series, but it's books, one following another, so... it's kind of series. Hopefully I can click with the humour, otherwise I guess it's pretty impossible to enjoy these. Marvin!!

7. Dragonriders of Pern series by Anne McCaffrey. Because it's old, and classic, and dragons, and could be a fun read.

8. Outlander series by Diana Gabaldon. From what I've heard, this is a series of book-bricks. (I refuse to get intimidated!) But hey. History, fantasy? Yes please.

9. The Chronicles of Narnia by C. S. Lewis. When I was kid, and where I lived - we never had access to these books. Which is a shame. But better late than never. Should be a fun read :)

10. Anne of Green Gables books by L. M. Montgomery. Same as with Narnia, as a little girl I never knew these books existed. And I was exactly the kind of bookworm-child who would have related to Anne so much. Oh well. I do intend to read, if not all then at least some of Anne books.