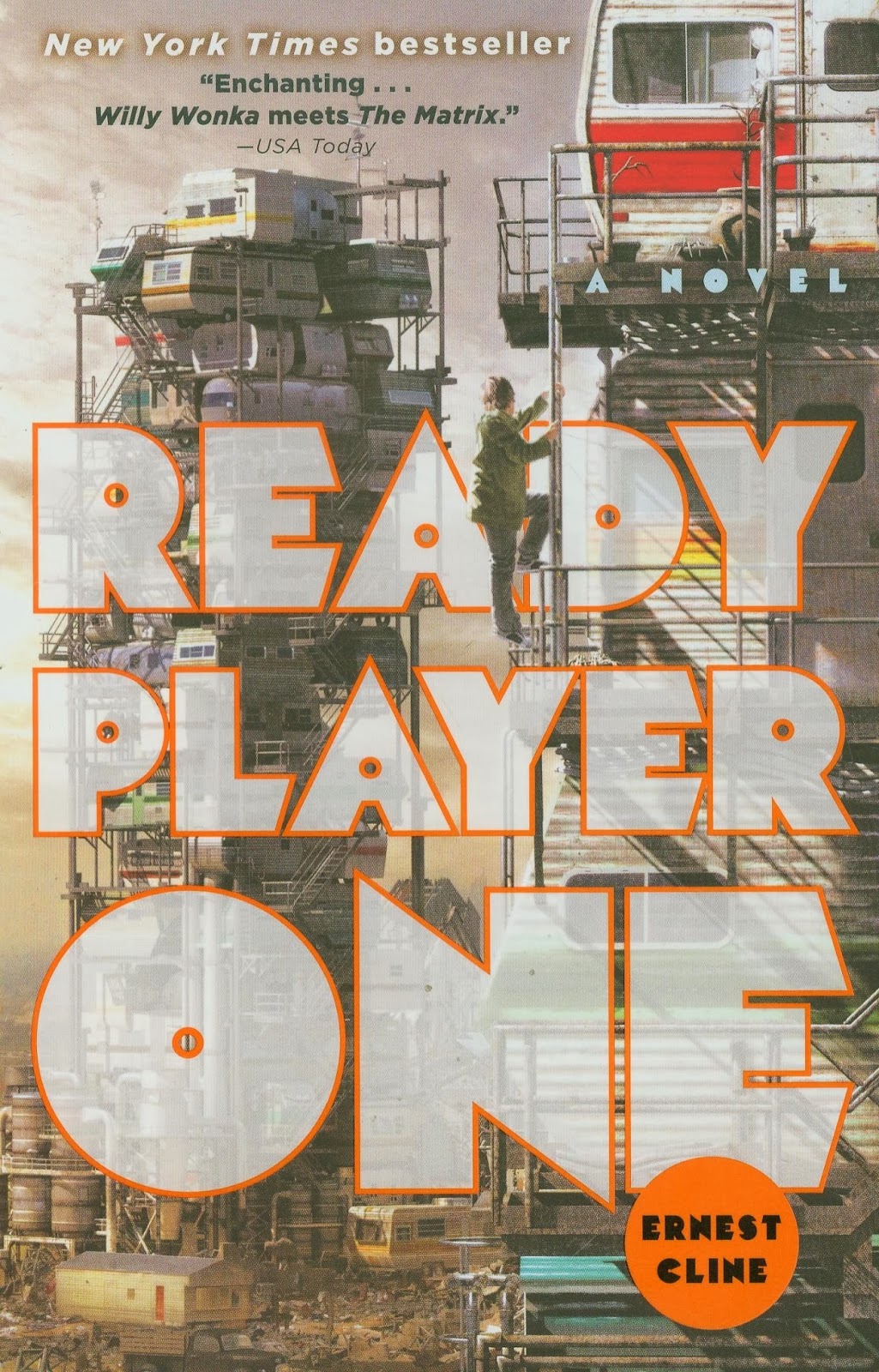 I have been playing computer games since 1990-ish. I played Street Fighter (1987) and Super Mario (1985) with my brother on Nintendo console when I was a wee little girl. I favourite computer games used to be the classic FPS (first person shooter) games such as Doom (1993), Quake (1996) and Wolfenstein 3D (1992) (the latter one was my fav). Very violent games for a little girl - might explain some character developments in later life - just kidding :p

I have been playing MMOs since 2009 - The Lord of the Rings Online, nowadays Dungeons and Dragons Online (I've never tried, nor do I intend to try, World of Warcraft). Oh, there was also short visit to Guild Wars, but really - quite short.

This book was written for me.


Let's start this off with my very own soundtrack pick for this book. It was pretty much one of the first things that hopped into my mind when reading Ready Player One:

The absolute pinnacle of my nerd life has probably been the period in the beginning of 2000s when I was obsessed with "a single-player roguelike video game" called NetHack (original release date 1987). Here's a little example of a typical dungeon level in NetHack:

Yes, I do realise this is about as nerd as you get... I completed the game several times, mostly with my favourite class valkyrie. Completing this game was not easy and took a lot of time and dedication. Most of my male gamer friends of the time were genuinely surprised that I had even done that. Clearly, it was too nerdy for even their taste :p Around the same time I also played MUDs (Multi-User Dungeon/Domain/Dimension), which are/were basically like MMOs without graphics. Around that time I also had my brief but passionate affair with The Legend of Zelda (1986). These were the glorious days, I tell you.
I know many people appreciate Ready Player One mainly because of its tons and tons of 1980ties' pop-culture references, and although I do love me some music (I was quite a bit into Def Leppard, Bryan Adams and other weird stuff when younger; "Canadian rock band Rush" is one of my very favourites even today, though imo labelling that one simply "rock band" does it disservice), movies and TV-series from this era (not fashion though - definitely not the fashion), the main reason I loved this book was everything related to virtual reality and games.
The book is set in a dystopian world of year 2044. The Real World has pretty much collapsed (the scene where the main character takes a bus - which has basically become a moving fortress with protective plates all over and equipped with six heavily armed guards was very eerie) and the whole population spends majority of the time in OASIS, a virtual life-like reality. I won't talk about synopsis as for me it is just the background to the rest of the awesomeness of this book. The book is littered with all kinds of references to the pop-culture and video games from 1980ties and its greatest value clearly lies in reader's ability to recognise and relate to as many of these things as possible.
This book is clever. * ** ***(See the notes in the bottom for some examples.) I noticed so many things. I think it'll take a few re-reads to notice everything because the plot is interesting enough to make you want to read fast just to find out how the competition will go.
Over the years, as I have formed friendships in virtual realities with nothing but my avatar to represent myself to other people, I've thought a lot about the conflict that is somewhat central in this book: how adequate of representation can your virtual avatar be of your real self? We see Wade/Parzival in how he comes off in OASIS, and we see him also as he is in Real Life - a slightly overweight, lonely, antisocial boy. I am not sure how good representation it is of the general population playing games out there right now (people I know on more closer levels are nothing like the stereotype), but the stereotype of The Gamer is definitely out there.

It is, of course, 100% true that you can modify your personality behind your avatar in the game. It doesn't mean you are necessarily lying (though plenty of people do, of course) - you are just prone to hiding the things that are maybe less pleasant about yourself and your life. Things that were not so easy to hide if you were to communicate with those people outside the virtual world. It's natural, everyone wants to look their best, but nevertheless, it is still not a true representation of yourself, and I think whenever forming any kind of deeper relationships in virtual world (it also means general chat rooms and such), it's something everyone should keep in mind. It's good to take everything with a grain of salt, basically.
Back to the book though - at times the border between the reality and the virtual reality became very vague. It felt Inception-isque, if you please. I had to track back several mental steps at some point when Wade was playing a game inside a game. I don't know how Ernest Cline did it, but it was very well done.

I think what makes this book so good for such a wide audience is that it speaks to so many people, although maybe on a bit different levels. If you are someone who loves dystopian lit, you'll enjoy this book. If you are into pop-culture in general (and specifically into pop-culture of the era described in the book), you'll enjoy it even more. If you are a gamer and especially if you are a gamer with experience of having avatars in virtual multi-user worlds, you probably can relate the most to this book. And you don't have to recognise every single reference in the book (is that even possible?) - but I think it's likely that the more you do, the more enjoyable the story is.

One thing to keep in mind though is - don't take this book too seriously. There might have been a few times where I was "Is this really possible...", but it doesn't matter. If you are an IT-expert, you might cringe at some points, but it doesn't matter. This book is about something else completely. Just read it, and have lots of fun while doing it.

---
* Wade/Parzival keeps showing off the Scoreboard  to the readers quite regularly as long as his name is displayed in the top there. But as soon as Sixers get the edge and fill the TOP10 of the Scoreboard, he stops publishing it altogether in his narrative. I felt it was a very clever way to illustrate the whole notion of "On Internet, you can show off your best face, and attempt to hide things that are not that pleasant".

** I'd already decided what I was going to do when it happened. First, I would choose one of the kids in my official fan club, someone with no money and a first-level newbie avatar, and give her every item I owned. -- Whether consciously or sub-consciously, Wade/Parzival uses "her" in this sentence. In MMOs, since the female population has been, at least so far, considerably scarcer than male population, it is very common that males show favouritism towards females (or characters they believe are females). Help them do quests, give them free items. I am not completely sure if Cline had that in mind in that section, but I sure made the connection.

***42 is probably one of the more famous and significant numbers out there and I noticed it being used also in this book - Wade's apartment is on 42nd floor, later on his hab-unit is numbered 42G. Interestingly, the Japanese gamer Daito lived on 43rd floor - a coincidence? There might have been more of such references that I just didn't catch all at once.

If you'd like to read some more coherent reviews that actually focus on the book (:p) check out those that I have read and liked:
Halliday seemed to expect everyone around him to share his obsessions, and he often lashed out at those who didn't by Red at What Red Read (18.06.2012)
Review: Ready Player One by Ernest Cline by Rinn at Rinn Reads (01.02.2013)
Ready Player One by Ernest Cline by Sarah at Sarah Says Read (22.07.2012)
Ready Player One: Full of Shininess and Unicorns (note: contains no actual unicorns) by Alice at Reading Rambo (24.05.2012)