﻿
I haven't written about books I've bought/received for a long while, so there is... horror! two piles to show at once now. Some of those I have even finished already, hehe. 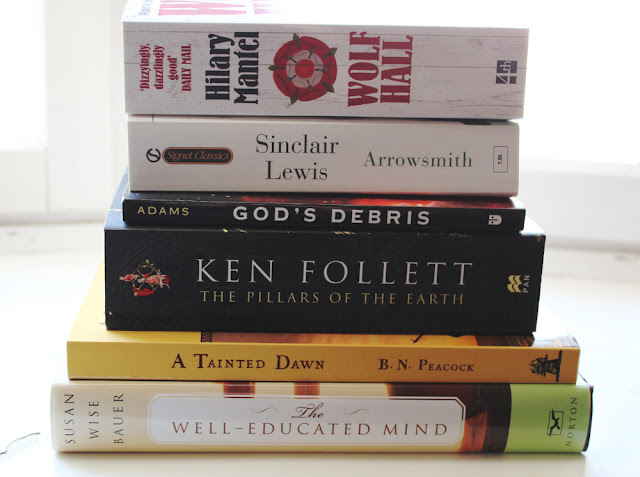 From top to bottom:
* Hilary Mantel, "Wolf Hall" - was an impulse buy, but since I'm going through the longlist of this year's Women's Prize, and Mantel is in it with the sequel to the "Wolf Hall", the purchase has worked itself out quite fine.
* Sinclair Lewis, "Arrowsmith" - a Classics Club book that I got to read for the Spin event in March. Finished it, liked it. Might try out some more Lewis in future.
* Scott Addams, "God's Debris" - something that can be called "a mind exercise" by the author of Dilbert. The premise of this slim book seems very intriguing, I love literary mind games. Won it a while back from a giveaway.
* Ken Follett "The Pillars of the Earth" - another brick, which I can't wait to start! It's something about building a cathedral in 12th century and I have faith it's going to be a-we-some.
* B. N. Peacock "A Tainted Dawn" - another piece of historical fiction (I really do intend to make my grand foray into the genre). Travelling by the sea and military conflicts. I won this book.
* Susan Wise Bauer "The Well-Educated Mind" - it's a book that is supposed to help us read and interpret classics. If it will manage to make me ask more questions about books, and seek more answers - good. 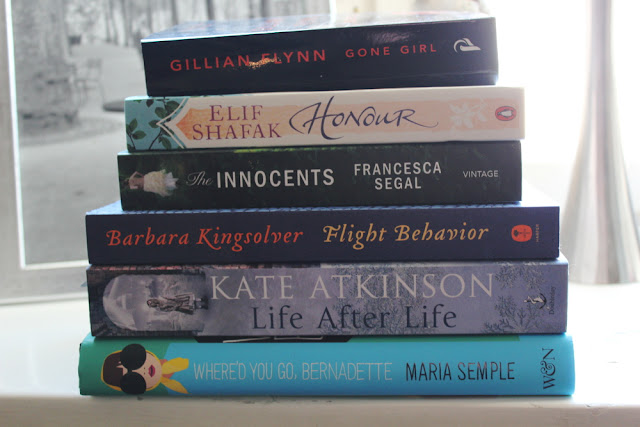 Women's Prize 2013 books:
* Gillian Flynn "Gone Girl" - read it in a few days, had some issues, but I think it's a good book for people who are after fast-paced writing and story twists. I personally am more focused on the depth and style of writing, which is why plot-based novels ain't quite my thing, but I'm glad I read it (bought it before I knew it was longlisted for WP). But, I don't expect I will try other of Flynn's works any time soon, if at all.
* Elif Shafak "Honour" - set in London, Istanbul and a Kurdish village, I'm looking forward to this one, but I will probably read the other books from this pile first.
* Francesca Segal "The Innocents" - I see family drama. Expecting this one to be a hit or a miss.
* Barbara Kingsolver "Flight Behavior" - I haven't read any Kingsolver and I want to love her, so I am very, very apprehensive towards this book.
* Kate Atkinson "Life After Life" - reading this one now, and loving it so much. Almost don't even want it to end. Fascinatingly structured novel.
* Maria Semple "Where'd You Go, Bernadette" - read it, loved it, need to write about it. The humour! But then again it is no wonder considering that Semple has written for Arrested Development, one of the funniest TV-shows there is :)
Posted by Riv at 13:35