Well, I don't want to be a soldier, he thought. I know that. So that's out. I just want us to win this war.
/p. 352/
I remember thinking I'll choose that Hemingway for the Modern March event, because otherwise I wouldn't find motivation to read it. Thank you, Modern March! This was such a beautiful novel.
From the back of the book:
High in the pine forests of Spanish Sierra, a guerrilla band prepares to blow up a vital bridge. Robert Jordan, a young American volunteer, has been sent to handle the dynamiting. There, in the mountains, he finds the dangers and the intense comradeship of war. And there he discovers Maria, a young woman who had escaped from Franco's rebels...
The novel takes place in restricted settings in restricted period of time and with restricted cast of characters. Setting - the pine forests in Spain, period of time - about four days and character sheet includes about 10 repeating names. There are a few flashbacks, but luckily not too many to make reader struggle with immersion. And immersed I was. It felt like I could almost smell the forest and feel pine cones under my feet.
Hemingway's style has always been source of debates. I know many consider him boring, plain, maybe too macho. I have read "Farewell to Arms", which I liked, and "The Old Man and the Sea", which I didn't like, but that was because I had problems with the story itself, not the writing. This being my first Hemingway in English, I discovered that he is very much my cup of tea. No beating around the bush! No need to constantly say things that are obvious anyway! I guess his writing smells a bit like testosterone, but it suits me fine. There are two women in the novel - beforementioned Maria and Pilar, who gives out very strong matriarchal vibe. She can cook, plan tactics, be a diplomat as well as blow up enemies, when needed. So I have so far not many problems with how women are described in Hemingway world, either. Maria was a different cup of tea, but she was a war victim anyway and I will not even pretend to understand what that may feel like.
What I liked a lot about "For Whom the Bell Tolls" was how it became more and more poetic as the story went on. There were some really, really beatiful passages, which made me raise an eyebrow thinking about all the talk I had heard/read about plain writing. Let's take a little peek into the main character's head:
You have no family but a brother who goes to battle tomorrow and you own nothing but the wind and the sun and an empty belly. The wind is small, he thought, and there is no sun. You have four grenades in your pocket but they are only good to throw away. You have a carbine on your back but it is only good to give away bullets. [...] Everything you have is to give.
/p. 384/


One of the central topics of the book is the flow of time, or more precisely, how it can feel very different, depending on situation. In a war situation, you only live a day, or even an hour/a minute at a time, because every next moment may be your last. I think this kind of environment causes an interesting contradiction - on the one hand, it is easier to be completely apathetic and feel like there is no future and on the other hand, all the feelings and emotions you have are way enhanced. Based on that, I found the romance between Robert and Maria believable and beautiful, but there was always a thought back in my head annoying with questions like "Would it be the same in "normal" (meaning non-war) conditions?" 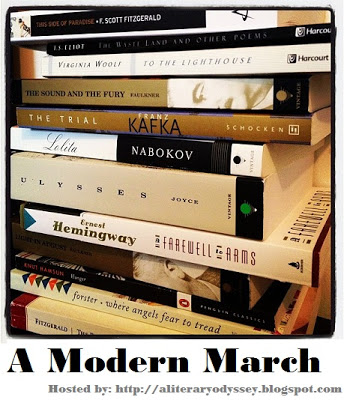 Also, I learned from this book that Spanish are awesome 'cos they bring whiskey. Yeah.