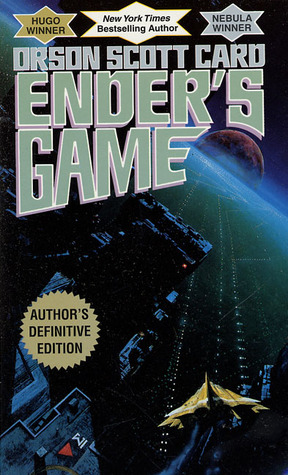 "Come on! You're Ender Wiggin! Don't tell me what eleven-year-old kids can do!" /p. 318/
First published in 1985, "Ender's Game" won Nebula Award in the same year and Hugo Award the year later. Quite an achievement.
It is a science-fiction (obviously) novel about future, genius children, aliens, other planets and also about loneliness and the need for love. It starts with the six-year old wunderkind Ender Wiggin being accepted to a Battle School located in the space. He is expected to become the Commander of the Earth to beat the aliens that are supposedly threatening to perform their Third Invasion against the planet soon enough. Ender is the "third" child of his parents, at the time where two-child policy has been established on Earth. He was conceived with the sole purpose and hope of him becoming the saviour of the planet. The novel follows Ender's training first in the Battle School and then in Command School. On the side, his older siblings Peter and Valentine, also genius-children but with certain, khm, "defects", have an agenda of their own.
This was actually a re-read for me - I did read "Ender's Game" back when I was in high-school, or even younger (don't really remember that well). So that is well ten years back. I read it in Estonian and this time, in English. I have always held the book in quite high regards, remembering how captivating it was, and how much I enjoyed it. The re-read was a very interesting experience. Obviously, being younger, I didn't get nearly as much out of the novel as I did now. And this is not necessarily a good thing.
For one, this book is very much plot-driven. There are a few hooks and twists, which, if you know them beforehand, make no impact. Secondly, I actually did have a few problems with the novel this time around.
No doubt it is well-written. I think Card is very attached to his characters and he has good ideas when it comes to interplanetary space affairs. There is a lot of dialogue in the book, mixed with Ender's thoughts and ponderings about his situation.
The main problems I had came down to pacing and some parts of characterisation.
Pacing - the novel begins not slowly, but let's say, average pace. Not too much introduction, but enough to get a picture of Ender's family, his through-goings at school, and soon enough, the "real" story kicks in. After that, we spend a loooooong time in the Battle School (and not that I complain because it's really interesting). The problem is that proportionally, what happens in the end of the book (focus put on the Command School and especially, the very ending), feels very much out of balance. It almost feels as if the last quarter of the book is meant as a prequel to something else.
I found it easier to understand that pacing-issue after I read Card's Introduction to the book (written in 1991). He writes where he got his ideas and how it all actually began with the idea of a Battle School in space, and how he had to create the rest of the story around this idea. So yes, understandably, it will be the centre point.

Characterisation - well, this one is hard to argue, because I have had no pleasure of knowing pre-teen genius children in my life ever, but I sure had a lot of questions. Is it believable that a child goes on and on day after day doing nothing but train and be engaged in tactics? When is the breaking point? What is his motivation? To "win" day after day after day? Maybe it works like that for geniuses but I have a sneaking suspicion that one needs something else after years passing by. I am not saying that Ender didn't struggle; many times his inner battles were shown, but it did not (almost) show in any way in his actions. Those genius children have a vague idea of what it would be to have a childhood, but I'm not sure if they even ever consider this as something remotely accessible for themselves. Also, Ender, being the "third", knew from the beginning why he was born, what were the expectations and what he was supposed to do. That is one heavy burden to bear and you can't but to sympatise with this particular lot of kids.
Just thinking to myself - if I was an outcome of some kind of a goal for my parents, instead of just to be who I am and make a life, it'd be painful.
On another note - I have never been the type to be overly exited when hearing the news about books being turned into movie adaptions, but learning that "Ender's Game" will actually be on the big screens in the end of this year made me go a bit "ohboy-ohboy-ohboy". I wanna see the battleroom!
I know that Card has always been very protective towards the novel and he has had offers from Hollywood to shoot the film, but according to Wikipedia, he has always refused when creative differences have become an issue. If I had a hat, I would for sure tip it to Mr Card for it shows how much he cares for his creation and characters, and that can be a rare thing nowadays.
Here is a very interesting interview with Card himself on tidbits regarding the synergy between the movie and the book. Some alarming sections there, for me personally ("There are no scenes from the book in the  movie and there are no scenes from the movie in the book." - Really? Confusing much *snicker*), but I am never overly worried over the differences and whatnot, mainly I just approach the pieces of art with open mind and no prejudices, and form an opinion later.
﻿﻿