The Kite Runner by Khaled Hosseini 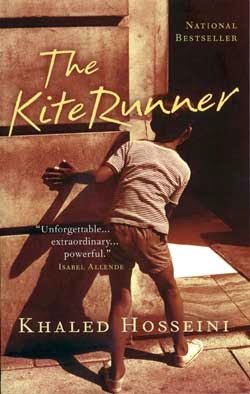 I bought The Kite Runner already about a year ago and was hesitant to pick it up because although I saw people love it, I always had this fear that maybe the book will fail to impress me - and unfortunately it was so. But I'm getting ahead of myself.
The book is set in Afghanistan (among other places - but the focus is definitely on Afghanistan) and granted, it's a book about a culture a regular person does not know a lot about. This book has a bit of a shock value, which also tends to be something that draws readers in.
The main character Amir is, most of the time, extremely dislikeable - and this is not something I have a problem with. Although dislikeable, he made human mistakes and human decisions. My biggest beef with Amir was not the fact that he was dislikeable but the fact that I didn't get some of the things he did. Example: Amir's passion in life was supposed to be writing, from the early age he wanted to become an author (regardless of hardships like his father's complete disapproval of such an "unmanly" profession). There is a scene in the book, where another person takes Amir's stories, which he has brought for someone to read, and throws them into a trash bin. Does Amir get defensive about his work, does he get angry, does he do something? No, nothing. Based on the book, not a muscle moves in his body. He just leaves. It gave the impression that he is very passionless author; that it is something he does because it's "just a job". It just felt really odd.
The rest of the cast was pretty much very flat. The characters felt somewhat shallow and too much either really good or really bad types.
The writing did not grasp me at all. At one point I felt like I was reading a poor translation, only... this book is originally written in English. There were a few chapters where I was simply sighing because it felt like reading a Latin American telenovela (spoiler territory - you know the kinds where at some point it becomes obvious in a very blatant way that all the characters are actually each other's fathers, mothers, grandparents and aunts all at the same time).
Khaled Hosseini uses (I believe) Farsi words throughout the novel and although I get that it is supposed to give the text cultural depth, it is a bit of a slippery slope to take. Firstly, I don't think anyone speaks like that - generally in English but a few words here and there in another language. Secondly, the words are not translated in footnotes or separately, so in the end they either remain untranslated or then he just repeats them - an expression in Farsi and then in English. It results in a total hodgepodge, which I personally don't fancy that much. But as said, I get why he did that - I just don't think it came out very well.
The Kite Runner is hugely popular and I can totally appreciate it in the sense that it gives a glimpse to a culture that your average western reader is not that familiar with. This is definitely a lot better than nothing. However, I have a feeling that it could be done so much better, with a lot more depth and detail, and a lot less cliche involved. I think one reviewer said something along the lines that "this is the book a white American reads to feel better about the state of the world" and although I find this statement offensive and way too generalising, I have to agree to a point. It is the kind of book we read to be more informed, and nothing wrong with that. I would just prefer that the books, which inform me, were also crafted in a skillful manner and had good, 3D characters. The main problem with The Kite Runner, for me, was that if you take away the layer of the subject matter and the foreign setting, nothing much is left - not that good of writing, no deep characters.