Gardens of the Moon by Steven Erikson 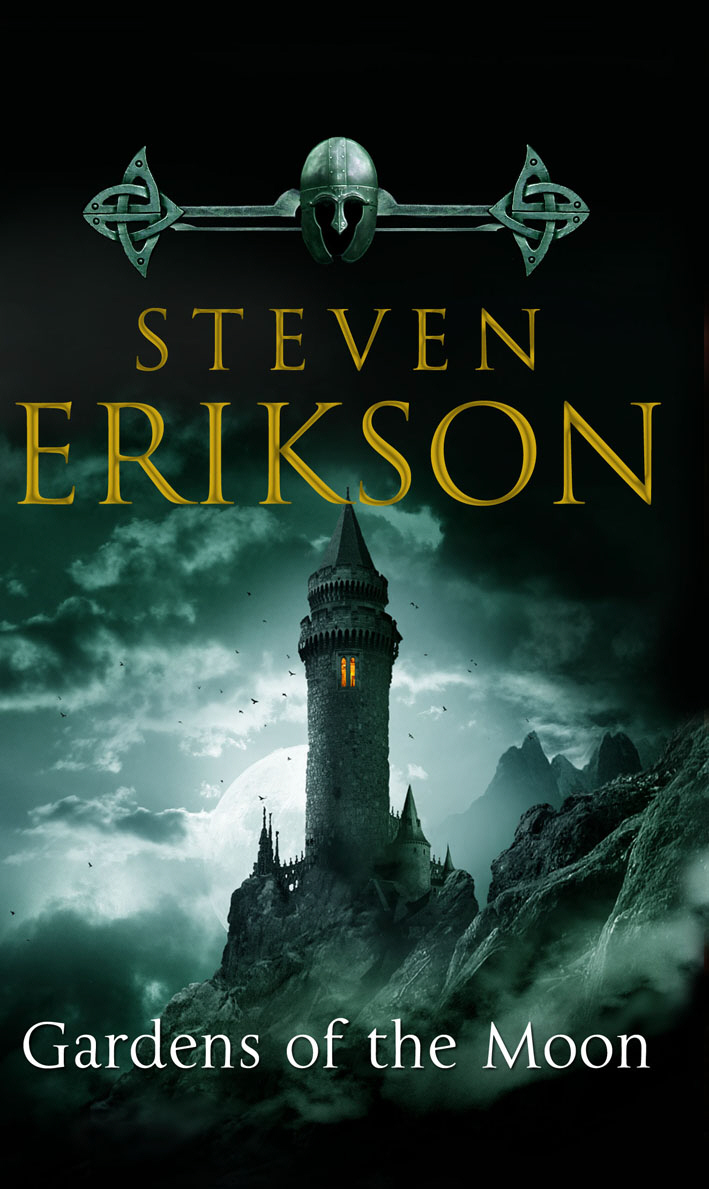 Bled dry by interminable warfare, fighting and bloody confrontations with Lord Anomander Rake, the Malazan empire simmers with discontent. Its legions yearn for some respite.
For Sergeant Whiskeyjack and his Bridgeburners, and Tattersail, surviving sorceress of the Second Legion, the aftermath of the siege of Pale should have been a time to mourn the dead. But Empress Laseen's gaze has fallen upon Darujhistan. For this ancient citadel, last of the Free Cities of Genabackis, still holds out against her.
However, the empire is not alone in this great game. Sinister forces are gathering as the gods themselves prepare to play their hand...
(From the back of the book.)
This is a book that has been idling on my bookshelf for years. I tried reading it about four times before this time, and I just didn't get into it. The best I did was the last attempt, when I made it near some 400 pages, and then stopped (the book is about 700 pages). Who attempts a book for four times and still doesn't give up? Me, apparently. Thing is, I knew I would like this book, if I only ever found a way to finish it. Timing is so important, and now I felt that the time had come.
Gardens of the Moon is high fantasy. It includes characters with supernatural powers (sorcerers, mages, healers, seers) but also some ancient and fantastical creatures. Given the multitude of different creatures included, you get the idea that the world in which these books (10 books in the series) are set in is huge.
The book starts with the bang, and Erikson never gets into excessive "I'll explain some things now" sessions. In fact, the reader is pretty much left on his own, oftentimes scratching head while trying to figure out all the motives and connections between the characters and events that take place.
It is dark and gritty (hence I chose to read it for RIP VIII), but not expressed in that kind of graphic manner as, for example, George R. R. Martin's A Song of Ice and Fire world. The darkness and the grittiness is more subtle in this book and you rather feel it than see it in front of your eyes. Heads do get chopped off and souls get taken, bellies do get stabbed.
Due to the myriad of characters included, there are no few central characters that are everywhere and all the time, but regardless of that, the character developments are nicely done. There were a few that were very intriguing and definitely hiding a lot more than seen in the first glance.


Even though I immensely enjoyed Gardens of the Moon, it is not the kind of book I would recommend light handedly. It is definitely not a book for someone taking the first steps in the world of high fantasy - George R. R. Martin and Robin Hobb, to name a few examples, would be better, more accessible choices. If reader has background in role-playing games, it makes entering the Erikson's world a lot easier. In fact, the whole idea of the Malazan book series was born from a role-playing game. I have been a gamer for a long time (yes, nerd alert :p) and I could definitely recognise the game-ish elements in this book. Also, if you think that there are waayyy too many characters in A Song of Ice and Fire series, this might not prove to be a good book choice for you.
But people who want to challenge themselves and find it rewarding to make effort for a book, this might be a suitable story to attempt.
Erikson says in the preface:
These are not lazy books. You can't float through, you just can't.
He also says that readers will either hate or love his books and I think I can agree. I'll try a few more books from this series and then decide which camp I belong to.
Posted by Riv at 09:16