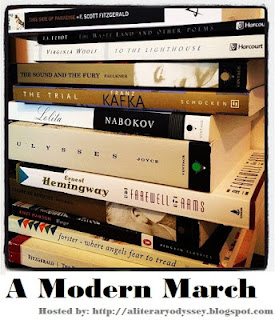 Allie over at A Literary Odyssey is hosting an event to my liking this March - A Modern March.
People will be (voluntarily!) tackling authors like Virginia Woolf, James Joyce, William Faulkner, Ernest Hemingway, E. M. Forster, et cetera, et cetera... Stream of consciousness, experiments in literary techniques, multiple narratives, inner monologues, all the Make It New stuff from the late 19th-halfwaythrough the 20th century.
In general, I love modernists. For different reasons. I might not personally like some of them that much, or I might find them very hard to approach (Joyce, Woolf), but I can relate to the movement as such. I enjoy the concept of thinking of something new. Changing the old ways. Progress! Yes. Making It New. I also fancy some of the authors just for making me move my "little grey cells" a tad more than when I read something else, more conventional.
During the literature courses in uni, as much as I am able to recall, I read at least a few modernist pieces. The brightest flame among them Faulkner's "The Sound and the Fury"; I was able to rave about this one more than any other book for a good while (and I don't even generally rave over books... almost ever). We read "To the Lighthouse" - to this day I remember the scene with the pot of stew. It was the first time I realised that food can actually act almost like a character in novel. Kafka - how I loved the bureaucratic corridors of human mind in "The Trial", and how it depressed the me in late teens. We read Thomas Mann, to whom I did not take particular liking, but I really want to read him again, and will do that during the Classics Club project. I have read "The Great Gatsby" (Fitzgerald) twice and I loved "Lolita" (Nabokov), which I think is actually hanging on the border of modernism and postmodernism (such is the nature of genres; they mix and melt).
Anyway. I intend to read some modernist goodness this March, yes I do! Crossing over with my Classics Club list is plenty of stuff, so I'll just come up a short initial, spontaneous list (who doesn't love a good list, even if it's short):
* F. Scott Fitzgerald "Tender is the Night" - it's sitting on my bookshelf and I'd love a good excuse to give it some attention rather sooner than later.
* Ernest Hemingway "For Whom the Bell Tolls" - quite the contrary with this one; I think without a good motivational factors I might get to that one who knows when.
* And I'm hoping to pull out a copy of Woolf's "Mrs Dalloway" from the top hat by March, because I reallyreallyreally want to read it (and then I want to read "The Hours" right after it!), so fingers crossed.
The list may, of course, and is likely to, be altered.